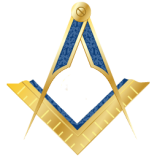 The traditional Masonic Emblem - The Square and Compasses 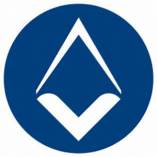 The new Masonic Logo introduced in 2015 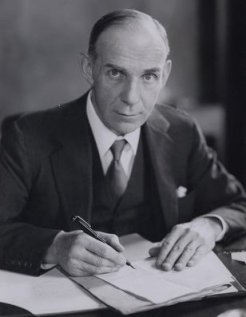 The inspiration for the Lodge, whose family motto became the name of Palma Virtuti Lodge.

The Right Honourable Roundell Cecil Palmer had been initiated into Panmure Lodge  No.

Minister of Economic Warfare from 1942 to 1945, in charge of the Special Operations

Executive. He became a Privy Councillor in 1929. and was made a member of the Order

Worshipful Company of Mercers, and following his political career he became chairman 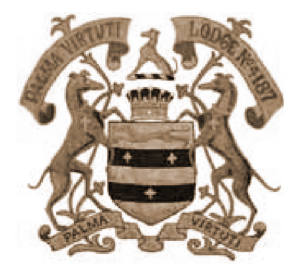 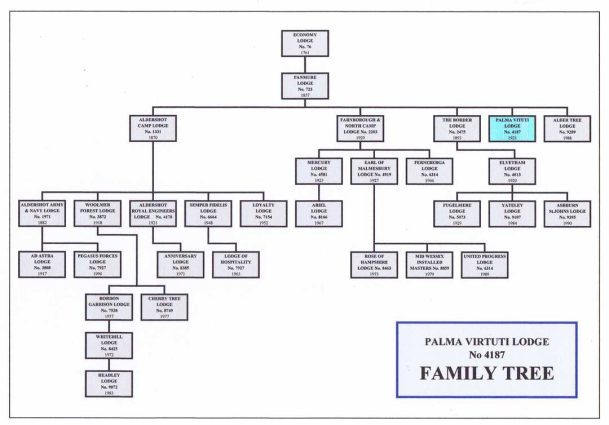 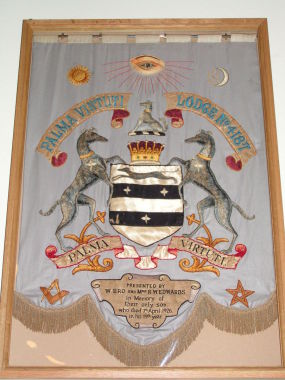 The original Lodge Banner donated in 1926 by the Lodge's 3rd Worshipful Master, W.Bro. Reginald Edwards in memory of his son. 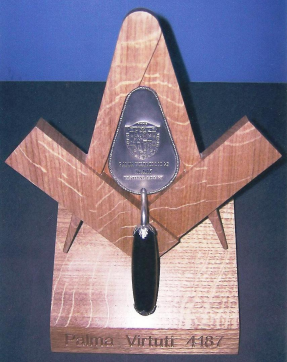 The ceremonial pewter Trowel, awarded to the Lodge for raising over £18,600 for the Provincial 2005 Festival in aid of the Masonic Samaritan Fund. 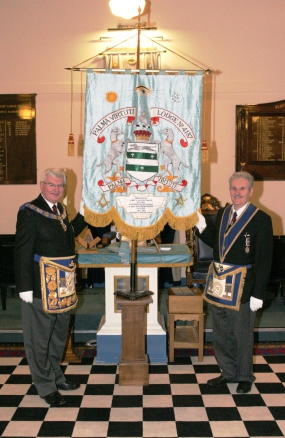 The presentation of a new Lodge Banner by the Provincial Grand Master, R.W.Bro.  Brian Bellinger in 2007.

The banner was donated by W.Bro. Tony Martin in memory of his late father and Past Master of the Lodge, W.Bro. Bob Martin. 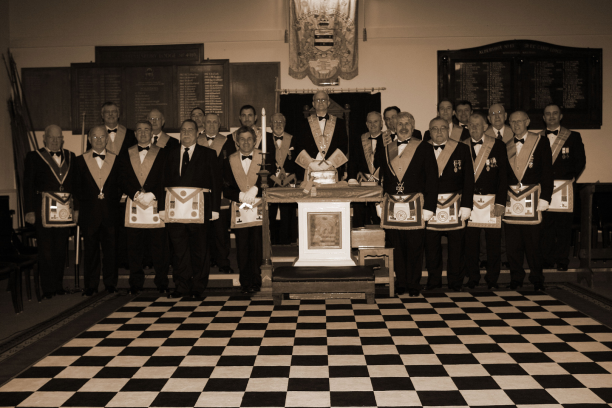 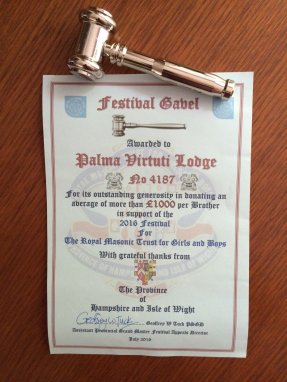 The ceremonial engraved Gavel, presented to the Lodge for raising over £33,500 for the Provincial 2016 Festival in aid of the Royal Masonic Trust for Girls and Boys. 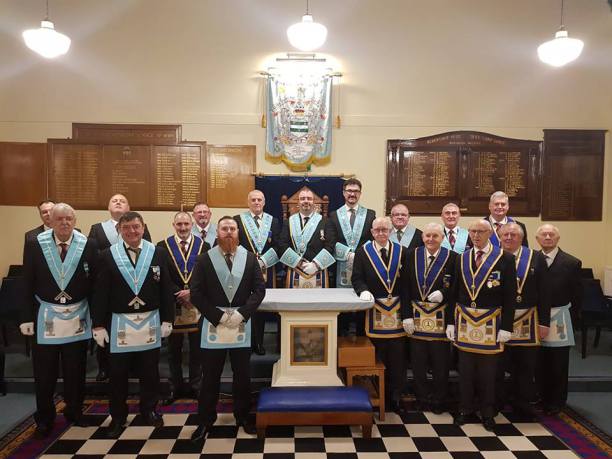 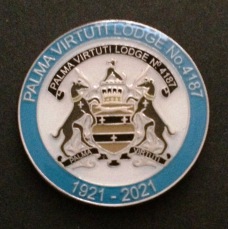 The commemorative Lapel Pin Badge presented to members to celebrate the Lodge's Centenary in 2021. 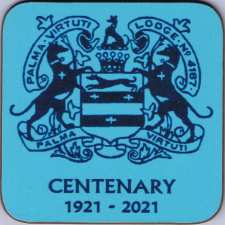 The commemorative Coaster presented to members to celebrate the Lodge's Centenary in 2021. 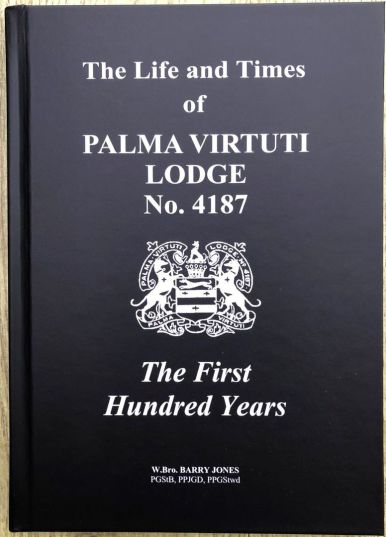 The Lodge history "The Life and Times of Palma Virtuti Lodge No 4187 - The First Hundred Years" was published to mark the Lodge's Centenary in March 2021.

It is a 145-page hardback book with a foreword by the Provincial Grand Master.

It includes not only the factual history of the Lodge, but various snippets of information about Palma Virtuti and its members that gives an insight into the whole character of the Lodge. It also contains the various national, regional and local events that have affected the Lodge and its members.

The book is part of the national collection in the Grand Lodge Library, and is being sold in aid of the Hampshire and Isle of Wight Provincial 2027 Festival in aid of the Masonic Charities Foundation. 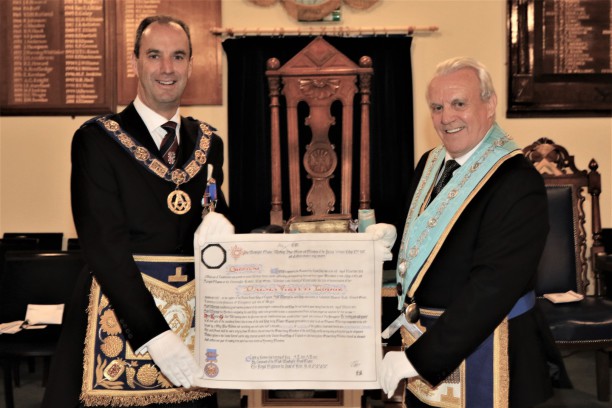 On 17th November 2021 the Lodge was honoured with a re-scheduled official visit by the Provincial Grand Master, R.W.Bro. Jonathan Whitaker and his team to mark the Lodge's Centenary and to present the Worshipful Master, W.Bro. Barry Jones, with the Lodge's Centenary Warrant and the brethren with their Centenary Jewels. A gathering of 55 brethren and a full capacity dining room  at the Festive Board afterwards. 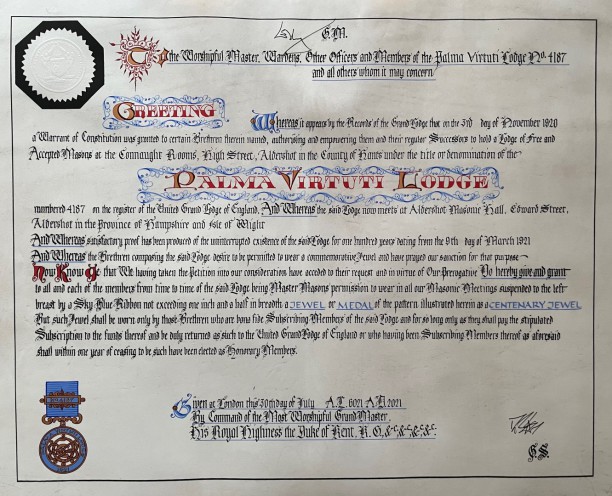 The Lodge's Centenary Jewel, presented to members at the Official Provincial Visit to mark the Lodge's 100 years in November 2021. 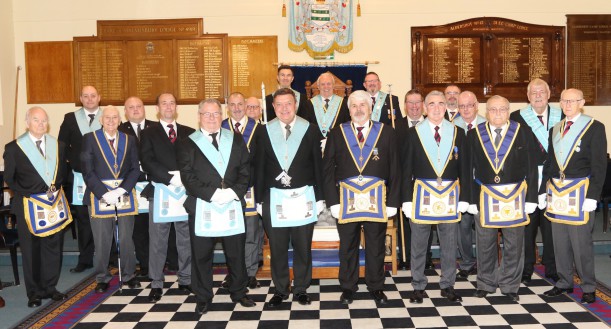 A Lodge Group in November 2021 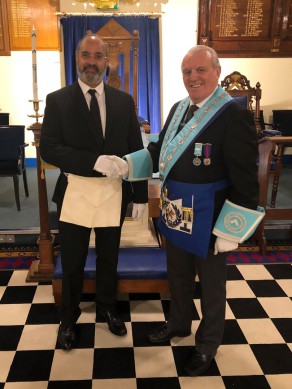 The Lodge welcomed its latest member, Bro. Mak Sigh Johal in January 2022. Mak was Initiated by the Worshipful Master, W,Bro. Barry Jones, and will be a great asset to the Lodge. 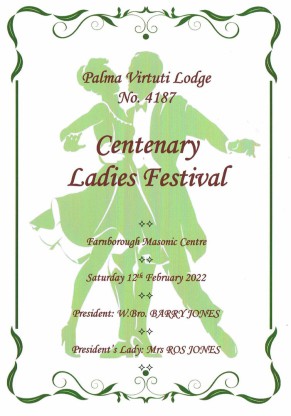 The Lodge held its Centenary Ladies Festival at the Farnborough Masonic Centre in February 2022, a very welcome opportunity to dress up and gather in numbers again after the restrictions of the COVID pandemic. 67 Ladies, Gentlemen and Brethren enjoyed he fantastic event, with excellent Catering , Toastmaster and Disco. Plentiful raffle prizes and over £600 raised for charity 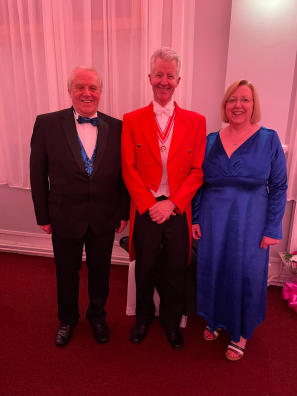 The Ladies Festival President, W.Bro. Barry Jones and  his Lady Wife, Ros, together with Mater of Ceremonies, W.Bro. Nigel Worsfold. 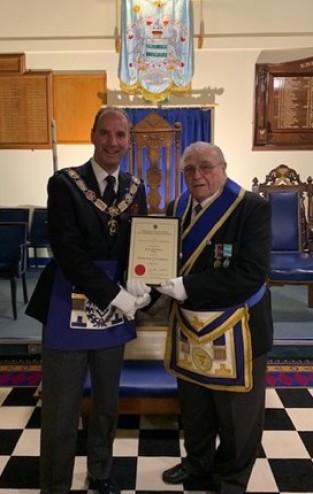 The Lodge was delighted on 18th May 2022 to receive a surprise visit by the Provincial Grand Master, R.W.Bro. Jonathan Whitaker. He turned up to celebrate his friend, W.Bro. Henry McWhinnie's 70 years as a Freemason since his Initiation as a 20-year old into Montgomerie Kilwinning Lodge No. 624 in Ayrshire, Scotland.
Henry was presented with a 70-Year Certificate and Lapel Pin, as well as a copy of his original registration document, lapel pin and letter from his Mother Lodge, which had been researched and obtained by W.Bro. Chas Cooper.
Henry's final surprise was to be honoured by the Provincial Grand Master with a field promotion to the ultimate Provincial rank of Past Provincial Senior Grand Warden - a truly fitting recognition of an impressive Masonic career!